50 years since the Dhamma returned to India

The year 2019 marks the 50th anniversary since our late teacher, Satya Narayan Goenka (1924-2013), brought Vipassana meditation back to its country of origin, India.

Although Indian by descent, S.N. Goenka was born and raised in Burma (Myanmar). While living there he came into contact with Sayagyi U Ba Khin and learned the technique of Vipassana from him in 1955. After receiving training from U Ba Khin for fourteen years, Goenkaji went to India in 1969 and began teaching Vipassana.

As Goenka explains in the evening discourses of a 10-day Vipassana course: the initial idea was to teach the Dhamma to some close relatives, but —although he knew only a handful out of the millions of people in India— other people kept coming, also wanting to participate in a course. Goenka delayed his return to Myanmar indefinitely and travelled across India for years, conducting course after course.

The first year Goenkaji only taught in Hindi, hesitant to teach in English as he wasn't sure his ‘business man English’ was suitable for teaching the Dhamma, but after a year he began to conduct courses in English as well. In those days many Westerners had come to India in search of a spiritual approach to life and some of them became very dedicated Vipassana meditators. When in 1974 land was bought for the first Vipassana center at Igatpuri, a handful of Western students immediately began the work of meditating on the site and the building of the future Dhamma Giri.

When Western meditators returned home from India, demand for courses started to come from nearly every corner of the world. We. in Americas, can’t help but feel such gratitude towards Goenkaji.

It is hard to envision the amount of work done by him, due to which we all could come into contact with the Dhamma. For many years Goenkaji conducted course after course, chanting live in the mornings, giving all instructions and discourses himself, and holding interviews at noon and Q&A time in the evenings. 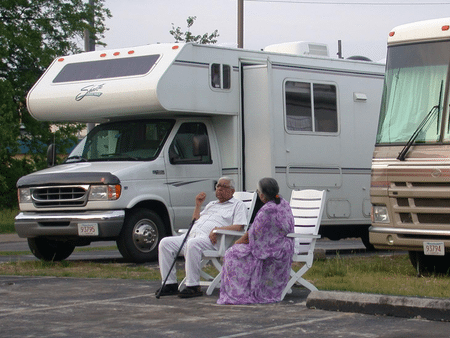 Goenkaji and Mataji (his wife) in 2002, in front of the motorhome they toured in during the 'Meditation Now' Tour, spreading the Dhamma across the West.

He travelled outside India to teach in many locations, including Europe, North America, Japan, Australia, New Zealand, Nepal and Sri Lanka.

As a Vipassana teacher, Goenkaji personally conducted over 300 courses!

In late 1981 Goenkaji appointed the first assistant teachers — giving them the responsibility of conducting courses as his representatives. At first the aim was to train the AT’s in giving instructions and discourses live, but this was later changed and recordings of Goenkaji were played instead. There were audio tapes of the discourses, the morning chantings and some of the meditation instructions, going back to the early 1970s. In 1979 the first videotapes were made. The full teaching —day by day, from beginning to end of a course— was finished in 1982, after recordings having taken place over the span of several years. Work then began on translating everything into most of the major European and Asian languages.

Today many of the seeds Goenkaji scattered have come to fruition. There are currently 196 Vipassana Meditation Centers in the world, and courses are held at another 138 off-center locations. Who could have imagined that the teaching of Vipassana would spread so widely? No one maybe —except Sayagyi U Ba Khin...

Sayagyi U Ba Khin, my revered teacher, strongly believed that 2500 years after the Buddha’s mahaparinibbana (final passing away of Enlightened Ones), the second Buddha-sasana (cycle of teaching) will start again in the land of its origin, and from there spread throughout the world for the boundless benefit of humankind. Dhamma will again arise with the practice of Vipassana. For millennia, Vipassana was lost to India. But it was preserved in its pristine purity in Myanmar (Burma). Close to the end of this 2500-year period, the historical Sixth Council was held from 1954 to 1956 in Yangon (Rangoon). It was during this time - from 1st to 11th September, 1955 - that I got my Dhamma birth. I sat my first Vipassana course. After benefiting me immeasurably for fourteen years, Vipassana returned to India on 22 June, 1969, with the blessings of my teacher. An interval of about 2000 years had passed. In spite of all the self-doubts about my ability, Dhamma started to take root in India.

I am merely a medium. Dhamma is doing its own work. “The clock of Vipassana has struck,” Sayagyi often said. “At this time, many people endowed with abundant paramita have been born in India and in the other countries of the world. The ticking of this Vipassana clock will attract these people towards Dhamma”. So it happened. Innumerable people from different countries, religions, beliefs started participating in courses. So too did leaders of various religions. All of them accepted this technique as their own; none of them felt that it was alien.